Published by Mark Revello On September 26, 2013 Leave a response 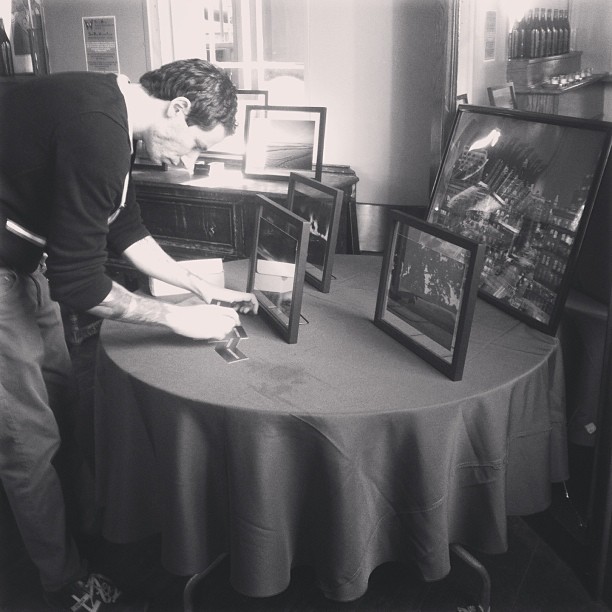 The founder of FreshGrafix, Staten Island photographer David Giordano, has precariously leaned over balconies, been forcibly pulled off stages, and will go where other photographers won’t in the search to get the perfect shot.

“I feel like a maniac when I shoot; I’ve been told that I am one too,” said Giordano. “You have to get the shot no matter what it takes; you can’t be timid when you’re walking around shooting. I am never thinking if what I am doing is going to get me in trouble; I’ll do anything.

Last week, on Sunday, September 22nd, Giordano displayed an exhibition of nine prints on the second floor of Edgewater Hall for the hundreds of restaurant-goers passing through for the inaugural North Shore Restaurant Crawl.

“That was like a last minute piece I put together and it went over really well; a couple hundred people came out. The reception was great; people loved it, and I got so many compliments,” said Giordano. “I took a photo in Huntington Beach, California, that I told myself not to put up on display. I loved it though so I put it up;  this lady loved the photo so much that she ended up giving me more than I had charged her for it.”

“When I shot for Steel Train I was leaning over the balcony to get my shot. There were so many people there that it was so hard to get a shot so I jumped off the balcony onto the stage,” said Giordano. “A manager from Noble Media had said to me after the show that I had pissed a lot of people off, but then thanked me for doing what I did. I saw the chance to get the shot and I got it.

Giordano considered shooting Levon Helms of the American folk rock group The Band the most memorable photography work he has done so far, second to shooting Garland Jeffreys, who had gotten him the gig in the first place.

“I met Garland, who was opening for Alejandro Escovedo, at a show at Bowery Electric. I had never heard of Garland, and he came up to me and asked to get a photo of him with his hat. Later on he asked me if I had gotten the shot, which I did,” said Giordano. “Six months later he asked to do the shoot for The Band, which was one of the better gigs I have done and was the most memorable. I didn’t know Levon was dying at the time either; he passed 3 months later and I was one of the last people to shoot him.”

When he isn’t getting pulled off stages or traveling throughout the United States, Giordano has showcased some of Staten Island’s more visually striking outdoor locations. In the future Giordano hopes to open a collection of the scenic beauty that Staten Island has to offer.

Giordano’s advice for aspiring photographers is perseverance, practice, and experimenting with new styles as much as possible.

“Patience, keep shooting, and get out of your comfort zone. Do that thing that makes you feel uncomfortable, that thing you think you suck at; eventually you become great at it,” said Giordano. “I was just reading a book and they were saying to get better to practice, practice, practice. At first I thought, that’s not telling you how to take a photo, but I realized that is how you get better; you keep practicing your craft.”

Here is a gallery of some of David’s work:

The Pains of Being Pure at Heart

DMC and the Pearls